Well, I did it tonight. Took down my first WPT title, at the WPT ‘Bad Boys of Poker 2′. It was a great night. The other players were Mike Matusow, Phil Hellmuth, Gus Hansen, Men Nguyen, and Jean Robert Bellande. This will go down as by far the WPT with the most chat at the table, as the mouths were running all the time. Probably 3 hours into it, Matusow looked over at me and said ‘Man, you talk more than I do….A lot more!’. I guess I consider that an honor.

Speaking of honor, in honor of my recent trip to Japan to promote poker, I wore a Kimono to the Bad Boys. It was quite a scene, as you will see in the pictures.

The game play was fast, and furious as you might expect, and this will go down as one of the quicker final tables in WPT history. The amount of play was OK, as we all had 250,000 to start, and the blinds were at 3,000/6,000. These TV things need to go rapidly, and tonight, we all obliged.

Things like this are so much fun. I want to thank the WPT people for including me, and being so nice. I support the WPT, as I have said before. And, while I respect other peoples opinions that the WPT take too many liberties, I will continue to support the WPT – they have been great for poker. I would say that even if I did not win tonight.

I had a couple of interesting hands. One with Jean Bobby where I had QJ, he had J7, and the flop came 8 9 10. No way he gets away from this, and it gave me a lot of chips. I felt I played really well, and when it got down to heads up, I had a bit of a lead against Matusow, and pushed him around for a few hands….always with absolutely nothing.

On the last hand, Mike set me up good with two kings, but I had a big lead, and a hand that has always been magic to me – the 8 10 of diamonds. I called, and sure enough the magic came with the flop being 8 10 2. No help, and it was all over.

Everyone was really nice, and the fans were really supportive. European Champion, and WPT title winner all in one year. Not bad for a guy off the street.

I’ll put some pics up soon. Enjoy them, and I will see you soon. Busy time for me, as I play Bay 101 tomorrow, and NBC National Heads Up starting Saturday. 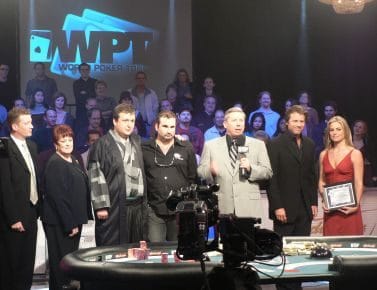 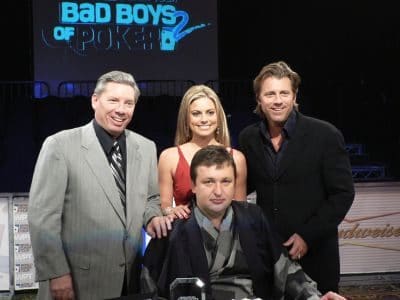