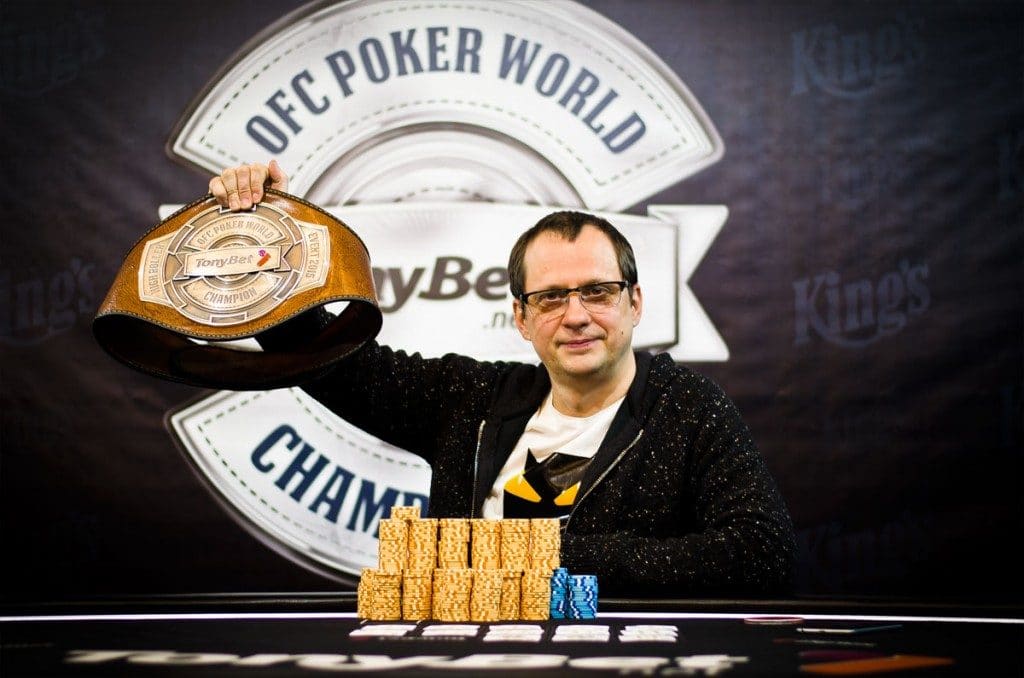 The second annual Tonybet Open Face Chinese Poker World Championship taking place in Prague is eager to set even more records than it did a year ago. Jason Mercier, Max Pescatori, Dan ‘Jungleman’ Cates, the young Polish sensation Dzmitry Urbanovich, Sergey Rybochenko, Jennifer Shahade and many other notables were in the field during its first two tournaments with even more expected at the upcoming Main Event.

Today early in the morning Russia’s Maxim Panyak became the winner of the richest-ever live OFC event, the €10,000 High Roller, collecting the record-breaking €110,000 first-place prize together with the champion’s belt. He beat his countryman Evgeny Kocherov in the heads-up battle leaving the latter with the €76,030 payout.

None other than Jason Mercier was the one who came in third place and collected the €50,655 prize. While he was determined to take home the title, the result was an upgrade for Mercier from last year’s 5th place when he busted just before the money.

The OFC World Championship €10,000 High Roller event not only attracted a star-packed field of 33 entrants, but also set new records. With €304,095 in the prizepool, it became the richest live OFC tournament in history beating last year’s record set at the same event which gathered a crowd of 23 players.

Unusually enough for a High Roller, the field of the €10,000 OFC tournament featured as many as four ladies with last year’s High Roller champ Jennifer Shahade, Isabelle Mercier, who triumphed in the OFC Progressive Pineapple event just the night before, as well as US’s Natasha Barbour and Russia’s Alexandra Usoltseva.

Among the most unfortunate players in the field was the hottest Polish star Dzmitry Urbanovich. Last season’s EPT Grand Final Super High Roller runner-up for €1.5 million bought in as many as five times, however, went home empty handed. Another big name in the tournament was Max Pescatori, Europe’s richest player in WSOP bracelets, who finished the event in fourth place for €37,000.

While the High Roller has certainly been a highlight of the world’s biggest live OFC event so far, the four-day show took off on Sunday with the €350 Progressive Pineapple tournament. It eventually hit the heights of live Open Face Chinese gathering as many as 108 entries and gathering a €32,999 prizepool instantly becoming the biggest-ever tournament of this particular OFC variation.

After 12 hours of play it was none other than Tonybet Poker’s own Isabelle Mercier who beat the entire field featuring Jason Mercier, Max Pescatori and others, and collected the first-place prize together with the honors of becoming the first Progressive Pineapple World Champion. In the final heads-up battle Mercier defeated Germany’s Frank Gohletr.

So far the Championship is growing even bigger than its last year’s predecessor lifting the hopes real high for today’s €1,000 Main Event. In 2014 it became the biggest live OFC tournament in history attracting a crowd of 135 – a digit never seen before.

All OFC poker fans who cannot make it to Prague this year can still follow the action via the live stream available on the Tonybet Poker blog and even make a profit out of it. Tomorrow, on the second day of the Main Event, a password for a €500 guaranteed online freeroll will be announced during the live stream giving the fans of the game the chance to win big money for free.