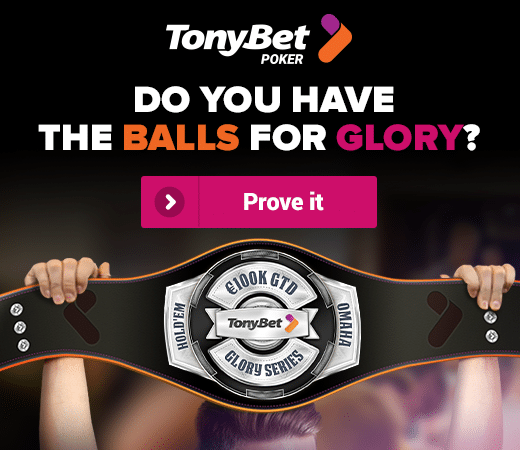 Tonybet Poker showed some big cojones last month by dropping loads of juicy tournament and freeroll action into the online poker scene and is now asking their players to do the same. At the end of February the independent site is hosting its biggest online poker series in history – the €100K GTD Glory Series with at least €100,000 in guaranteed prizes.

With the introduction of its new and fresh “No Balls – No Glory” philosophy in January, Tonybet Poker brought in thousands of new players mostly due to their €10,000 freeroll giveaway campaign, as well as huge tournament overlays. Now they’re bringing out the big guns, rewarding €100K in guaranteed prize pools in a week-long online tournament series.

“Having the biggest guarantee for an online series is the natural next step forward for us and our players,” Tonybet Poker UK representative Warren Lush said. “Right now we’re running one of the biggest live poker events in Canada, the Tonybet Winter Festival at Montreal’s legendary Playground Poker Club. Following the OFC Poker World Championship in Prague, it’s our second live series in just two months. After this the action goes back online for the €100,000 guaranteed Glory Series.”

The site, which is still the biggest online Mecca for Open Face Chinese poker recently introduced Texas Hold’em and Pot-Limit Omaha to its gaming supply and the €100K GTD Glory Series is all about the two most popular poker variations.

It kicks-off on February 28th and runs until March 6th hosting a total of 24 events in the course of eight days of non-stop tournament action. According to the site officials, the buy-ins will range from just €5 to €500 while the guaranteed prizepools for individual events range from €2,000 to €15,000. The series will feature rebuy and knockout tournaments with all the action taking place only at 6-max tables.

“We keep introducing new features to the site which are mostly demanded by our fast-growing player community,” Mr. Lush explained. “Being an independent site we can quickly adapt to the players’ needs and offer exactly what they need. For instance, we charge zero rake from our Hold’em and PLO cash games, which is unique to the online poker market.”

A week before the start of the series, Tonybet Poker will start running satellite tournaments as well as freerolls rewarding tickets to the Glory Series events for just the fraction of the price and even for free. Another way to gain access is to take part in the €15,000 guaranteed Grinderz League which is giving away free tournament tickets along with the guaranteed cash prizes in weekly and monthly cash game, Sit & Go, and MTT leaderboard races.

The week-long Glory Series will conclude on the night of March 8 with its two biggest tournaments, the €200 Main Event and the €500 High Roller both rewarding at least €15,000 in guaranteed cash prizes.

You can find the full tournament schedule on the €100K GTD Glory Series page.