I am in Vienna dodging bullets from some of the best players in the world and having the time of my life. I love the game! Hellmuth isn’t here but some players just can’t keep up with the competition. I did my best to goad him into coming and talking smack to him and about him, but he’s out, out, out! I even sent him a tweet extolling the virtues of drinking Guinness to give him steel, heart and commitment, and advised him to drink lots of it so he could become Premier League class again.

I found JESUS! I tried to find my money but he said “Maybe we can talk about it.” That’s more than I’ve gotten from Howard, he won’t even talk to me or anyone else about it. Jesus was polite and calm and I invited him to party.

I found Jesus again playing poker on the Premier League TV set and I went for it. I gatecrashed the set and disrupted everything. That is one of the things I do best. I make things happen. When it starts to quiet down and people think they are going to get a chance to relax and maybe sleep everything off, I like to jump in and put the spotlight on them, shake up the dust, and pull them back into the Tony G timeline.

I won Group A Heat 2 of the Premier League Live because I used my animal instincts.

Follow all the live updates at the PartyPoker Blog.

I am captured on canvas playing a hand of poker against President Putin by Nadia. The background of the painting is explained on her website. But I don’t understand why she is trying to get my mouth shut once and for all, do you? 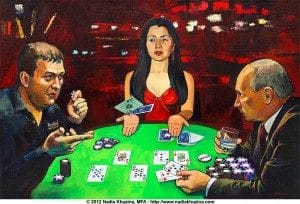 So many words to say and so little time!