Tonybet Poker, the biggest online Open Face Chinese Poker site announced the second online OFC tournament series to take place from April 26th to May 3rd. The site boasts it’s going to give away more than €30,000 in guaranteed prizepools throughout the course of 17 events.

Following the success of last year’s online tournament series, as well as that of the first live Open Face Chinese Poker World Championship, which took place in Prague last December, Tonybet Poker is running yet another big online series this spring. 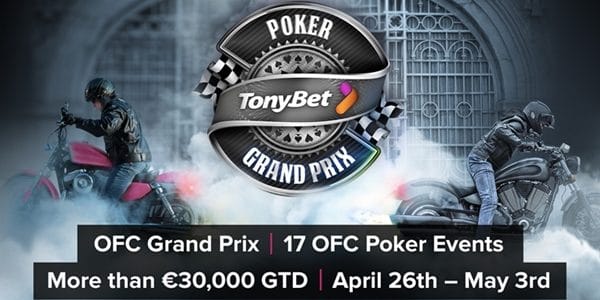 “Last year we were the pioneers of online OFC poker and most of the things we did were done for the first time ever. Despite that, both online and live events received very good remarks from our players, which gave us the confidence to continue the good run,” the Tonybet Poker spokesperson said.

This year the site has not only exceeded the number of OFC events from 12 to 17, but has also increased the total guaranteed prizepool from €25,000 to €30,000. Tonybet Poker representatives claim they’re going to run cash game and tournament leaderboards rewarding players with free tickets to the OFC Grand Prix events, cash prizes and even packages to the next live OFC Poker World Championship.

Since the site has just recently introduced two new OFC poker variations to its gaming supply, the Grand Prix will also feature a number of events played in the new 2-7 Pineapple and Progressive Fantasy.

“The two new OFC games we launched recently gained popularity among the players really fast, so we are really happy to them to the series. We will also be running a number of promotions allowing our players to qualify for the OFC Grand Prix events for free. We’re going to give away free tournament tickets to our twitter followers so everyone would get the chance at playing the series. Fifteen players will be rewarded with live OFC Championship tickets during the online Grand Prix, so there’s just so much to play for,” the spokesperson said.

The second-annual Tonybet Poker OFC Grand Prix Tournament series is set to take place from April 26th to May 3rd. For more information about the series, the tournament schedules, prizes and the ways to qualify for the Grand Prix events for free, visit TonybetPoker.com.